For Thanksgiving, we embarked on a hiking trip through Cottonwood and Marble Canyons in Death Valley National Park. It was an orienteering hike, in that there was no signage the entire way, and we would have to depend on old fashioned maps and compass most of the way. In addition, there was no guarantee that would be water through the 4-day hike, so I ended up carrying 11 liters in.

Here’s the National Park Service info page on the hike, and below is a topo of the two canyons.

I’ve also included the images of the maps I annotated with the actual trail at the bottom of this post, as well as the GPS files. If you used this to help plan your trip, please email me to tell me how it went!

The road there is along Cottonwood Canyon Rd, a pretty sandy dirt road that was just freshly graded when we were there, after having been completely washed away by the flash floods last summer.

The first few miles is along a 4×4 road. We took a lazy morning and started the hike in the early afternoon. You’re going to head for that gap in the photo.

It’ll be pretty obvious when you go through the neck of the pass to the other side. When you do, looking left, you’ll see the rather gradual start to Cottonwood Canyon:

Here’s our camp for the first night, just before the trail narrows considerably.

Morning of day 2, we were walking in some sweet granite and monzogabbro canyons. There were also a ton of these striated rocks. I’m no geologist, but would love to know how this formed.

Nearing the enc of the open dry wash, we spotted a tone that looks unusually like the stones in the Racetrack Playa

Eventually, the “road” ended, even though it had long ceased to be traversable by any car that I’d drive.

Note for future hikers. Soon after you pass this, there will be some very thick brush. Head left up to higher ground an avoid the seemingly semi-traversable low forward route. (It’s where Jessa’s going in this photo.) 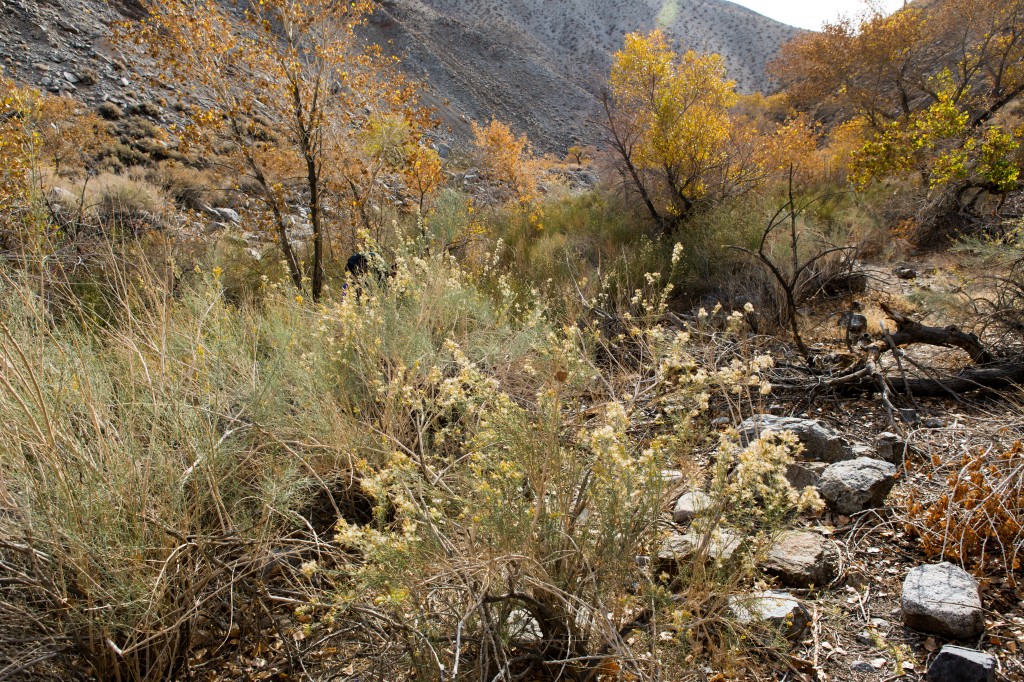 After being in the dry brush for so long, it was a visual shock to be among trees:

Water! I guess there was no need to pack in 11 liters, but better to have been safe than sorry!

Over the top, down into a small valley, through a ton of horse shit, and up a small hump, you’ll reach the other side! For the spring, look down toward the oasis, and head for the very top of it. It’s on the right edge in this photo. Once you head down, you’ll see a slight clearing, where you can actually reach the small stream. 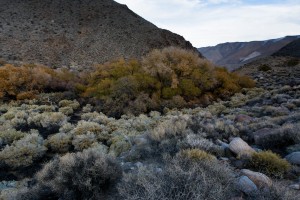 We rested here for a bit, then pushed forward into the large valley. We were a little confused about where to go, but really, just turn right in the first creekbed (or any creekbed). Once you’ve gained just a bit of elevation, it’s painfully obvious where the large long valley is. It’s so long in fact that it’s deceiving to the eyes. You feel like you can cross it in an hour, but it will take quite a bit longer…

We camped halfway up. We’d climbed to close to 4000ft by then, so by sunset, the temperature was already around 45, and it was close to or below freezing at night.

It was Thanksgiving, so we ate some freeze-dried turkey tetrazzini. Yum.

This next pass is the trickiest to hit, and pretty easy to get wrong. It’s the low point at the middle of the photo below. As tempting as it is, do not try to slowly climb and traverse; it turns out to be a lot easier to just hang low until you’re almost perpendicular to the pass, then go straight up the gully. Also, probably pretty obvious, but do not get tempted by just continuing up the valley that slightly curves left. When you see the end of the valley, hang right into this discreet pass.

When you reach the pass, it’ll look like this. Just go up any way you wish.

We started from around sea level, but at the top of this, we found snow!

Once you go over the crest, you’ll see a high valley in a sort of saddle shape. It’s a bit confusing where to go from here, but with some compass work, you’ll find that you essentially want to stay on the left-side hill of the saddle, and go over the ridge right in front of that hillock. Honestly, this was the trickiest part of the hike, and with “Dead Horse Canyon” directly to the right of you, we felt it was worth doing some careful orienteering to figure out where we were going.

Once you reach that second ridge, you’ll see what’s obviously the start of Marble canyon. It’s a very steep descent, so stay on the ridge as you go down. You’ll see a continuation of the ridge to the right. Definitely take it. You’ll need to do some brush scrambling near the bottom, but it most definitely beats just going straight down. You end up walking in a narrow canyon for quite a while. If you’re averse to narrow passageways or getting your ankles mercilessly cut up by shrubbery, this may not be the best hike for you. However, if you do get over those obstacles, you suddenly happen upon the entrance of Marble Canyon proper:

After a few more miles of hiking on the narrow canyon trail, we saw a mini-steppe about twice the height of me, where ancient floods had carved a flat platform perfect for camping.

Next morning, after 2 more miles, we exited the canyon into the rough gravel that we started on. Another mile or two later, we hit the old sign that marked the crossroad we had hit 3 days ago to start our journey:

This was the most serene backpacking trip I’ve done to date. On the entire hike, we saw 3 people, one doing an intense hike the other direction, and the other two doing a day hike in as we were heading out. The vastness and grandeur of the semi-arid highland chaparral just cannot be expressed in words–you walk, step by step, and many shrubs and hours and skeletons and ancient dried-up rivulets later, you realize that the golden-blue pass you’re aiming for has only processed minutely closer.

This must have been what it was like when Earth was young.

From my favorite Atmosphere album, When Life Gives you Lemons, You Paint That Shit Gold. With their incorporation of live instrumentation, the picture book morphed into a trippy popup.

Back in November, I took a two-week vacation down to Argentina and Patagonia.

Some selected ones below:
Butterflies in Iguazu:

Mashup between Down Under by Men at Work, and Midnight City by M83. Gives both songs a completely different feel.

It’s pretty annoying supporting both Windows and Linux systems. One of the things that comes up over and over is line endings. You’re about to run a script, and immediate get an error about the bash command not found or something bizarre like that.

Fortunately, there are easy ways to fix this.
(note, in the following, to type the ^M character, you’ll actually be typing ^V^M)

Solution 2: use the same replacement string in vim

Solution 3 (the really easy way): Use the dos2unix command that comes with most *nix distros:

That used to be the main reason I still tried to fly Delta. But now, there’s really not too many reasons to not fly Virgin, unless I have a spate of trips planned for somewhere like Minneapolis or another city Virgin doesn’t serve.

I was poking around, when I found another one of my photographs online!

http://ignitebrandgroup.com/portfolio-management-cfs.html, image 5 on the page.

It’s always interesting seeing your work appear in random places months after transferring or selling them.

I’ve always been a sucker for Afro-rhythms. Check out Spoek Mathambo, a relatively recent South African artist to sign to Sub Pop:

What ridiculous richness of textured rhythms!

Continued from Part I.

(For the complete set of photos, see the SmugMug gallery.)

On one of the days, we headed over to Mono Lake for the sunset. We were hoping to catch sight of some of the brine flies that we saw on Life (or was it Planet Earth?), but the main visitor center and local interpretive centers were closed, so we ended up going to the southern tufas, where none of us have been. Driving down the road to the lake, it looked like this:

You can see the tufas near the edge of the lake off in the distance. Tufas are these vertical mineral structure that are built up over thousands of years of underground mineral springs bubbling up through the lake. Over the thousands of years, the water level has also dropped dozens of feet, exposing these large white structures. They are gorgeous, especially in the light of a mountain sunset.

The sunset created a spectacular mix of oranges and warms from the sky, and the blues from the lake and tufas:

There were some ancient plants too that had been covered in dissolved and crystallized minerals:

Some more pictures of tufas:

We ended with a long hike in the ancient bristlecone pine forest. The Methuselah grove visitor center burned down in a fire two years ago, and was still in the process of being rebuilt. The elevation here was about 12,000ft, so the air was thin, the temperature was below freezing, and the wind often pushed 30mph. We jumped around a bit to warm up. Katie said she could touch her toes:

And off we go! We were panting for breath 10 minutes into this. Yay elevation!

Bristlecones are considered some of the oldest trees in the world, with the Methuselah pine, in this grove, the oldest living tree in the world, at 4,483 years old. They are highly resilient to all kinds of environmental conditions, including fires, cold, lightning, and erosion. They can adapt their vascular structures depending on destruction and water sources, and have giant roots that hug the surface to collect the rare near-surface water.

Nearing the top of the mountain, we took a lunch break:

Speaking of age, can you guess which is older?

Yes, in fact, that tree is about three times Jessa’s age. It also requires no jacket or gloves or hat. And is growing through straight rock. That’s actually one of the most amazing things you notice as you see these trees–so often, they are growing through, around and into solid rock. They are totally the honey badgers of trees. Bristlecone pine don’t give a shit:

This is the definition of gnarly: A whole forest of these gnarly trees! They’re called bristlecone pines because they form these purple bristly pine cones (thanks Ilya for finding one!):

At some point, we were all freezing, even in our winter coats, and were hurrying to get back to the car: With the elevation though, we still took breaks:

Group picture with an SLR?

What’s crazy is that trees like this are actually alive:

We ended the day parking for an hour or two, waiting for the sky to get dark, then looking at the stars:

Katie and Ilya stayed in the car since it was too cold. Look what you missed!