(The complete set of photos can be found in my SmugMug gallery.)

After the disastrous 2nd annual Mammoth Lakes ski trip, we embarked on our third one this year over MLK weekend. The problem was that there wasn’t any snow in Mammoth Lakes. Well, no problem, some of us said; we’ll just go hiking. And so we hiked through terrain for five days that’s usually completely impassable this time of year save on cross-country skis or snowshoes or crampons.

Tioga Pass was open this time of year for the first time since the 1930s, which cut an hour or two from our drive from the Bay Area to Mammoth. Tioga Lake was frozen over though, so we had a bit of fun (and a cold picnic) on the open ice.

The buckling of the ice as the lake heats up and pushes new ice outwards is incredible:

On our first day of exploration, we headed over to several volcanic craters that were formed in the creation of the Sierras. This required driving the Outback on a forest road, which, despite the serious lack of snow, was still covered in a thin layer of packed snow and ice. Taking advantage of this rare opportunity of both low ground-growth, and low snow, we walked around the crater. We saw this tree that was quite a fine specimen of its species:

Our next spot was hiking around Obsidian Dome, an enormous deposit of volcanic rock, including, unsurprisingly, quite a bit of black, shiny obsidian. The approach was another sketchy drive on a forest road, followed up a very steep (and very sharp) scramble up volcanic boulders:

There wasn’t exactly a top–the terrain was highly variable–but once the steep part ended, we felt like we were on a foreign planet: Even in this rather inhospitable environment, the moss and lichen still thrive: Many of the rocks look like they had been carved and patterned by rainwater, then readjusted by erosive forces:

Quite incredibly, there were even a few rare firs popping out of the ground. Other hikers have taken the liberty of protecting these young trees with a bit of a human touch:

After about two hours of walking aimlessly, trying to follow one of the winding trails, we were mystified by where the obsidian part of Obsidian Dome was. All we were seeing was this much lighter rock–rhyolite?–and occasionally, there was some granite. Though, after rounding a turn, we saw in front of us huge formations of much darker rock:

Indeed, we had found column after column of shiny, glassy, black obsidian:

An hour later, as the sun was setting, and temperatures were quickly plummeting below freezing again, we found the winding trail down to the forest. Recently, when I was in Atlanta, I was told I had to try these magical things called “Totchos.” They are tater tots, with nacho cheese on top. Being someone who has never really liked either tater tots, nor nachos–and trust me, I’ve been labeled a heretic many a time for these opinions–I was far from certain that I would enjoy the Totchos.

So after checking into the hotel, here’s us about to head out from our Midtown hotel to hit up the Nook. 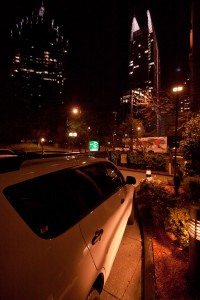 The Nook turned out to be a dark, dingy restaurant that specialized in burgers, totchos, and other American items, all with a southern twist. Later in my second trip there, I would  have their stuffed burger, which is an utter euphemism for an 8″-high burger with a medium-done 2/3 lb patty, stuffed with grits, shrimp, and sausage, along with a second grits patty on top, all topped by standard burger fillings.

The outdoor area of the Nook was supposed to be ski chalet-themed, but it was only partially decorated, so it looked a bit more like a confused mix of an attic, New Orleans chandeliers, ski trail maps, Bose Soundtowers, and football memorabilia. (And, thankfully, heat lamps). 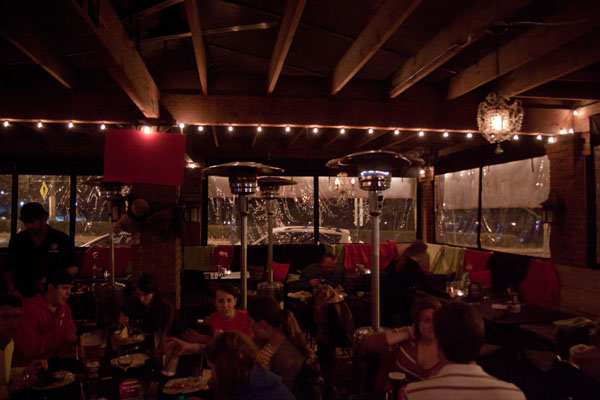 Less than ten minutes later, the totchos were served. I was very glad I didn’t get a second dish on top of the totchos. Describing it as merely tater tots and nacho cheese is misdescribing it. It had a rich taste, with tater tots that stayed crispy on the outside and fluffy on the inside. It’s almost pure carbs, but definitely the best tater-tot based dish I have ever had. Especially if you wash it down with a Sierra Nevada Torpedo. 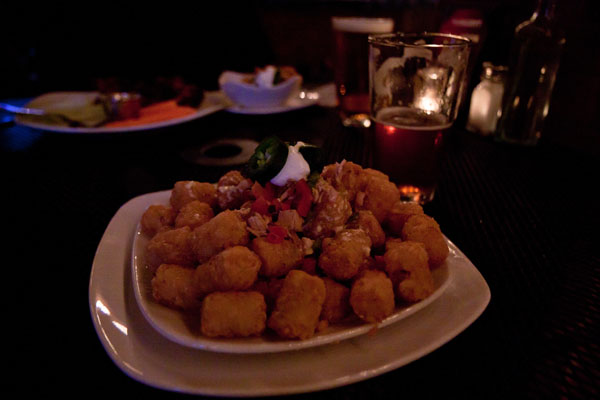 At the mentioning of Icelandic music, most music lovers will probably think either Björk or Sigur Rós. If their American album release in the spring goes well, Of Monsters and Men may potentially be added to this list.

I first heard this on Minnesota Public Radio’s The Current, which is perhaps the best music radio station in the US. Their album is available in Iceland right now, but nowhere in the US. They recently signed with UMG, so expect a wide release and more albums in 2012.

Since I’ve caught the bug, I might as well combine it with Dream Theater (and especially their keyboardist extraordinaire, Jordan Rudess).

and,
The Christmas Song:

The autumn colors are sparse here in the bay area. Only the rare maple or oak puts on a show of its warmer pigments, and often for just a few days before it realizes that it is in sunny California, and quickly blushes yellowish-brown in embarrassment at its own fortune. When I was out in DC, I brought back the leaves from a few gorgeous maples, and shot them against a black background, much like the maple leaf I had shot over a year ago.

The full album is here, but below are some of my favorites from the shoot.

Some veins are better at supplying the chlorophyll nutrients than others:

A guest photo by Jessa of a Ginkgo:

One of the few clean yellow-brown leaves:

Sometimes, green is nice too:

It seems like Coldplay has tailored its recent album, Mylo Xyloto

, even more to an arena setting than their last album, Viva la Vida. It’s an explosion of distorted glammy synths and I/IV/V chords and steady dance beats and Chris Martin reaching up octaves to belt out eminently sing-along-able choruses with a “oh’s” and “whoa’s.” And it’s great.

But let’s just compare and contrast:

I’ve recently started to travel more for work, and with it, comes lots of miles from multiple airlines, as well as a plethora of rewards points from travel credit cards, hotels, and car rental agencies. Keeping track of it is a hassle, so I’ve recently discovered UsingMiles. I’t s like a mint.com for rewards points and frequent flyer miles, collating it all in one place, letting you know your status in each, the number of points or miles until the next level, and when they expire. You can even search for rewards flights directly from the site, which will bypass the really annoying search interfaces some airlines have.

M83’s new album, Hurry Up, We’re Dreaming just dropped a few days ago, and like several of their previous albums, it is like a transporter into the dreams of childhood. This song, thought not my favorite from the album, is a nice synecdoche for the whole.

I’ve been trying to do some cool time lapses, and learning a lot as I go (as well as purchasing even more equipment). Eventually, I may reach the level of a photographic hero of mine, Dustin Farrell:

…or maybe not. One can hope.

I’m still learning the basics right now, but recently, I finally achieved a nice flicker-less video shot over a large change in lighting, and with a battery change in between. It’s a little less than interesting, but you can see the result below:

Making time lapses is one of those areas where certain equipment does matter a lot. For example, I just invested in a heavy-duty Manfrotto tripod with a heavy Benro ball head after finding that my old Proline tripod, though stable in most situations, just wouldn’t cut it when you wanted the frame to be identical over many hours through windy conditions. A 32GB or Eye-Fi card was also essential, especially if you wanted to shoot in RAW to do some work in post. And I’ve been meaning to learn some basic electronics to make a large battery pack that would allow a few parallel packs, and a selector, so you can change out a battery pack without ever stopping the power delivery, and also, without ever buying another overpriced Canon battery again.

A recent writeup of a time lapse project of the whole of Burning Man was interesting, and gave me lots of tips. The guide is here, and the final video is below:

I heard this song all over Peru, and initially wondered if Peruvians were generally big fans of Simon & Garfunkel. Then I remembered that the name of the song was El Condor Pasa, which was Spanish, and that the condor lived in the Andes, and was a prominent symbol of the Incans. It turns out that El Condor Pasa is was a Peruvian song from 1913, based on Andean folk songs.